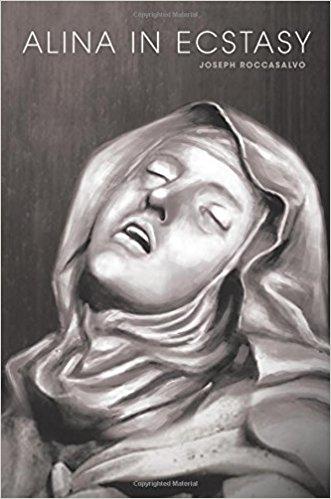 ALINA IN ECSTASY is about a man intensely hostile to religion.  Julian Mandel, more an agnostic than an atheist, is in a jealous and uncomprehending rage over a former lover's decision to join the Carthusians, a religious order noted for their silence and solitude. When Julian visits Alina, now Mother Maddalena, she claims not to recognize either him or herself as the persons involved in the sexual relationship that once existed.  Later, he learns she has died and been declared "Blessed" by the pope. So obsessed is he by this development, that he tries to prevent her advancement to sainthood. When Julian is suddenly cured of terminal cancer, for which he did not pray but which he believes might have been owed to Alina's intervention, he prays for the return of his cancer--which does. He cannot avoid the thought of a second intercession by Blessed Alina, an attempt to subvert her own canonization with the return of his cancer.  The Vatican quickly responds by declaring that "No protocol exists for treating as miraculous the reversal of a miracle".

THE HEADLINE MADE the front page of Vatican City’s newspaper L’Osservatore Romano. The English version read Portuguese Chanteuse Raised to the Rank of Blessed:

Thousands of Portuguese stood in front of St Peter’s to celebrate the beatification of Alina Lontana. She was the fado singer known in religion as Mother Maddalena, a Carthusian nun of Notre Dame Monastery. The ritual was the kind that gives Catholicism a glamorous name. Crowds were there to honor a woman who had acquired a global following for her music’s joyous lament. The vicar for the Roman diocese asked His Holiness to proceed with Alina’s beatification. A biographical note followed. Before entering the monastery, she bequeathed all the royalties of her recorded music to the foreign missions. Her bequest created clinics, orphanages and schools, and educated countless seminarians. The bishop in the Alps of Haute-Provence opened Alina’s cause for sainthood. Not long after, the pope recognized her heroic virtue. All stood as the pope pronounced the formula of beatification: “I grant that the Venerable Servant of God, Alina Lontana, known in religion as Mother Maddalena, be called Blessed; that her feast day be celebrated on October 21, in the name of the Father and of the Son and of the Holy Spirit.” Thunderous applause came from the crowds after her relics were brought to the altar.